“I am and always will be A RECON MARINE..SEMPER FI.” —  “Mac” McDuffee 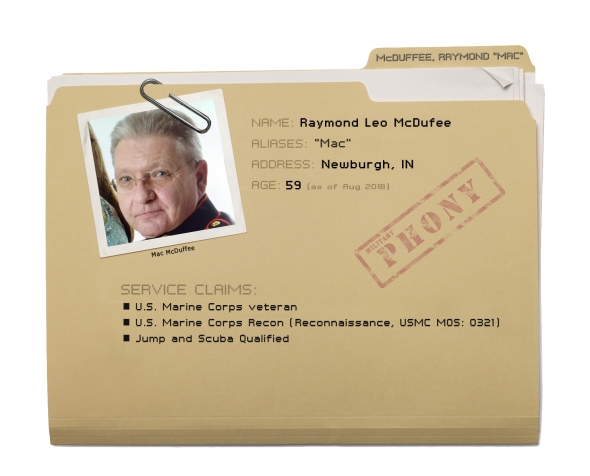 Raymond Leo McDuffee AKA “Mac” McDuffee comes to us from Newburgh, IN.   McDuffe is 59 years old as of August 2018.

McDuffee seems to like wearing his Marine Corps dress blues for photographs.

In these photos, he wears the ‘scuba bubble’ and ‘jump wings’ associated with Marine Corps Recon (MOS 0321).

In addition to the photos, the claim that he was a Recon Marine was supported by a post that he made on Facebook recently.

He wears a ball cap that also reinforces the claim of Recon. In the middle photo below, you can see the ‘RECON’ emblem to the right of the ‘PS’ in U.S. MARINE CORPS. Click the photo for an enlarged version.

McDuffee also posted a photo of an area that shows his pride for his service in the U.S. Marine Corps.  Click the graphic for an enlarged version.

Next, we took a closer look at the ribbons.  The middle rack of ribbons was from the photo of him holding the flag above.  The other two photos are from different angles.  Click the graphic for an enlarged version.

The Multi-national Force and Observers Medal is very interesting.  So is the Armed Forces Expeditionary Medal.

McDuffee ran into some Recon Marines on Facebook and they encouraged him to join a few groups.  Nobody recognized him from 2nd Recon Battalion but they thought by talking with him a bit more they could place him as well as link him up with friends that he may have served with. 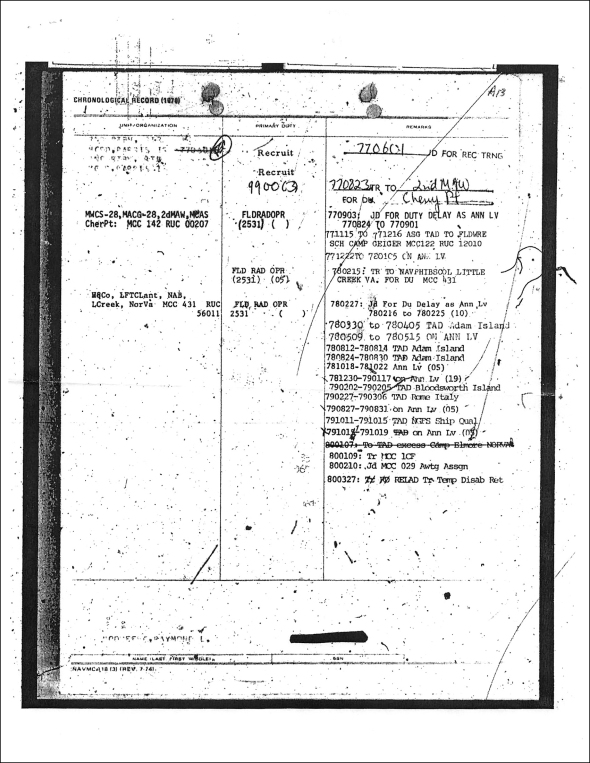 His records show that he was a Field Radioman (MOS 2531) and not Recon (MOS 0321).  McDuffee’s records do not have any training as a Recon Marine.  He has no scuba schools or jump school assignments nor does it state that he earned the scuba bubble and jump wing emblems.  His records make no mention of having a Navy Commendation Medal, or Two awards of the Navy Achievement Medal.  Neither does he have a Meritorious Unit Commendation, Good Conduct, Armed Forces Expeditionary Medal.  No NATO medal or any other medal for that matter are in his official records.

The only thing he got right in those pictures of his is his rank and Rifle Expert Badge.  He does not rate a hash mark on his sleeve for continued service, in fact, he did not even complete his initial enlistment.

He appears to have had perfectly honorable service and is a United States Marine… he should start acting like it.

His records show no deployments that would have awarded him a Sea Service Deployment Ribbon (SSDR) although his assignments reflect Temporary Assignment Duty (TDY) in Rome Italy.  He did not claim an SSDR but would have been awarded one, say, had he been with the MNF Lebanon.  He does seem to have a Navy and Marine Corps Overseas Ribbon in the various photos, but there is not one in his military record.

Then, there is the matter of the Multinational Force and Observers Medal…

The Multinational Force and Observers Medal (pictured above)

The Multinational Force and Observers Medal is authorized for wear as a United States military award under the category of “Non-U.S. service award” and is worn after all U.S. decorations and before foreign awards of individual countries. Multiple presentations are denoted by award numerals. Similar international military decorations include the NATO Service Medals and the United Nations Service Medals.

Raymond “Mac” McDuffee’s claims are not supported by his official military records.