Herbert Roland Severson Jr comes to us from Winsted Connecticut.  He is 56 years old as of August 2018.  He owns a gaming company called RPG Table Top Game Systems, LLC.

A closer look (below) at the uniform he is wearing in the above photo shows a Combat Infantryman Badge, Master Parachute wings, Airborne tab, Ranger Bn, and Air Assualt emblem. 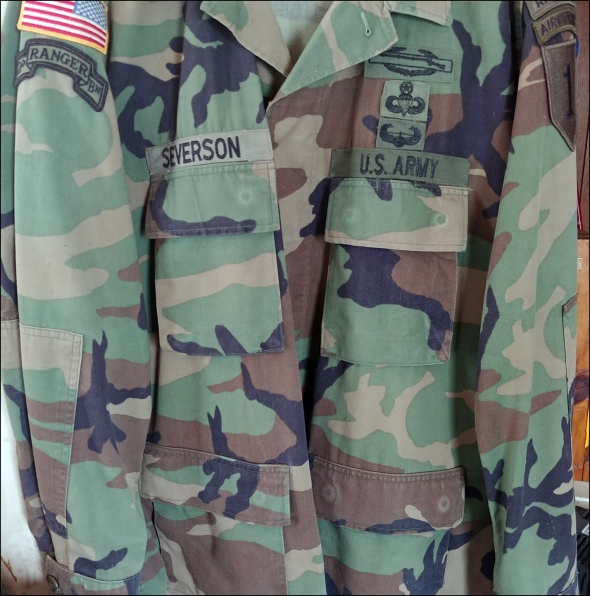 In addition, Serverson makes the claim on his Facebook profile that he retired from the Army after 22 years, was an Army Ranger and Combat Engineer, and was senior speaker at the Ranger School Graduation in 1981…

In this photo, Severson wears some kind of emblem on his cap, but it does not appear to be the standard U.S. Army Explosive Ordnance Disposal (EOD) badge which designates a profession made popular by the movie “The Hurt Locker“…

In the following Facebook post, he claims he was with the 2nd Battalion, 75th Ranger Regiment, 1st SOG (Studies and Observations Group)…

Back in March 2018, Severson had the 75th Regiment as his Facebook profile…

In the following Facebook post, he has a photo with ‘RANGER’ on his ball cap and talks about a posting at the SOG Rapid Response Force… 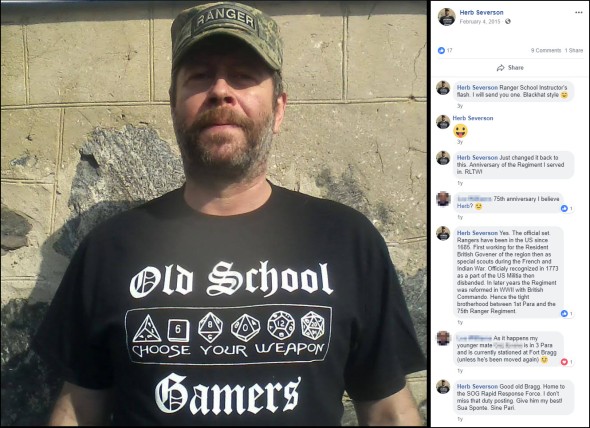 We mentioned above that Severson owns a gaming company called RPG.  This is significant because at one time he used the company logo as his profile picture when he posted. 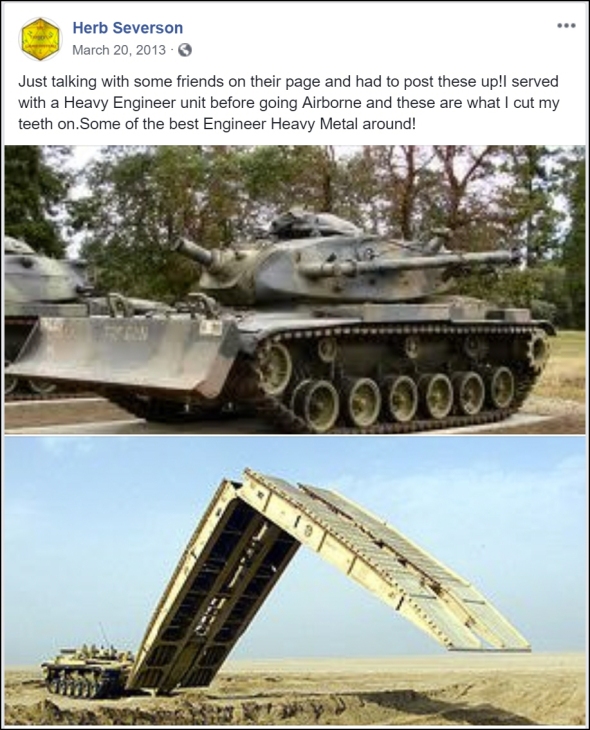 In this post, Severson reinforces his claim of Special Forces, Ranger, and Airborne… 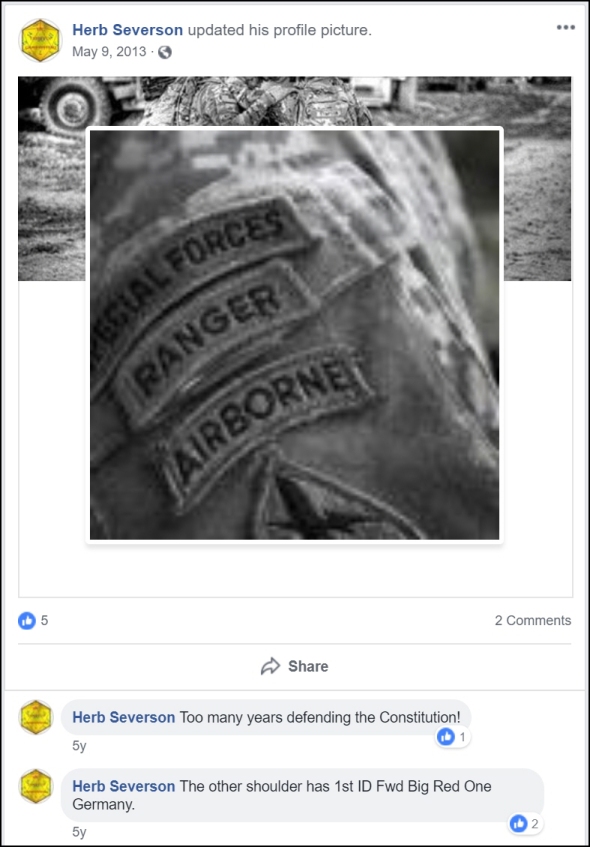 In this post, Severson talks about being in Grenada and using the M67 fragmentation grenade…

Here, he talks about being bothered still by grenade shrapnel…

In this post, Severson claims that he has two Purple Hearts and TBI… 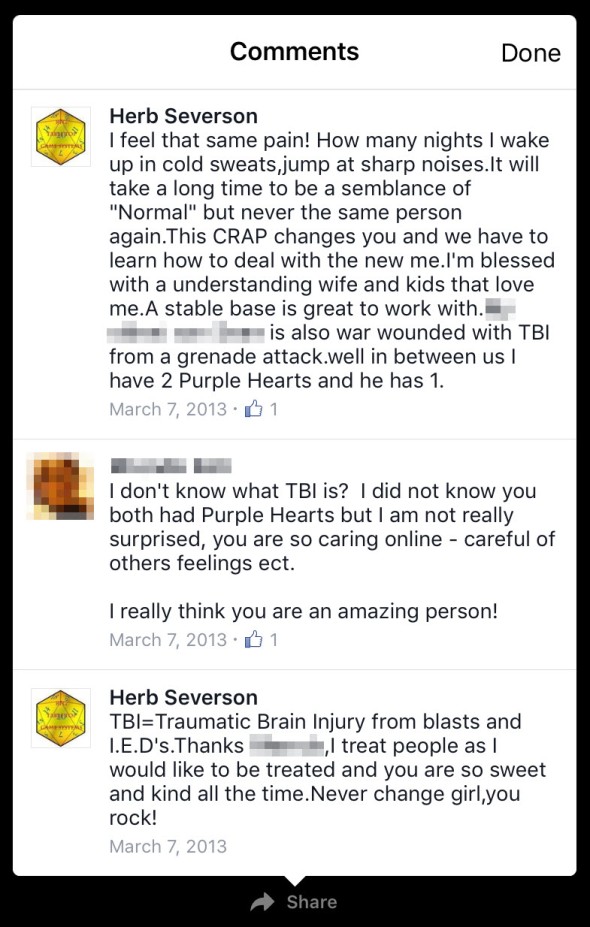 And he talks about being treated for PTSD…

Several of these claims were reinforced in the following discussion thread… 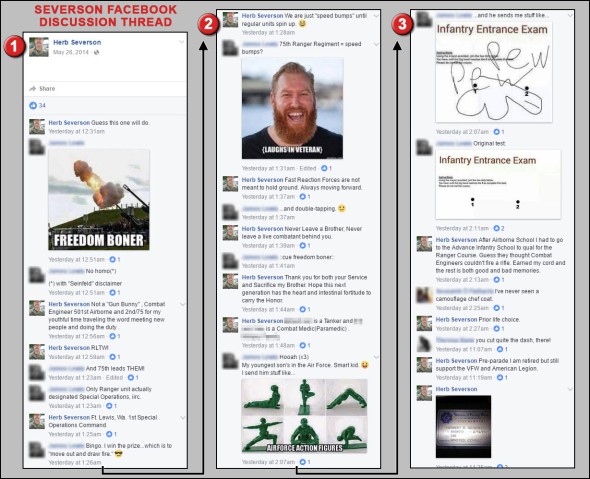 There are more claims on his Facebook timeline, we only grabbed a select few.

Then, in a bit of comical irony, Severson posts this on Facebook…

Severson’s military records were ordered through a Freedom of Information Act request with the National Personnel Records Center. 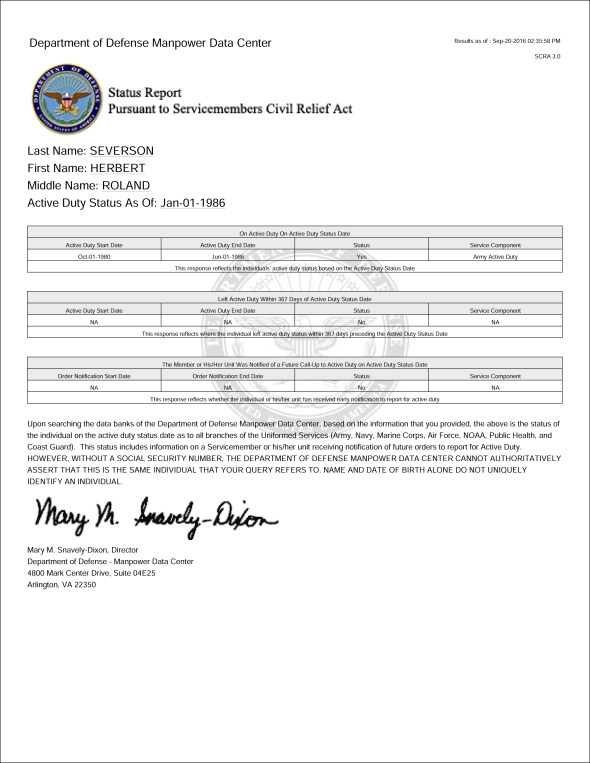 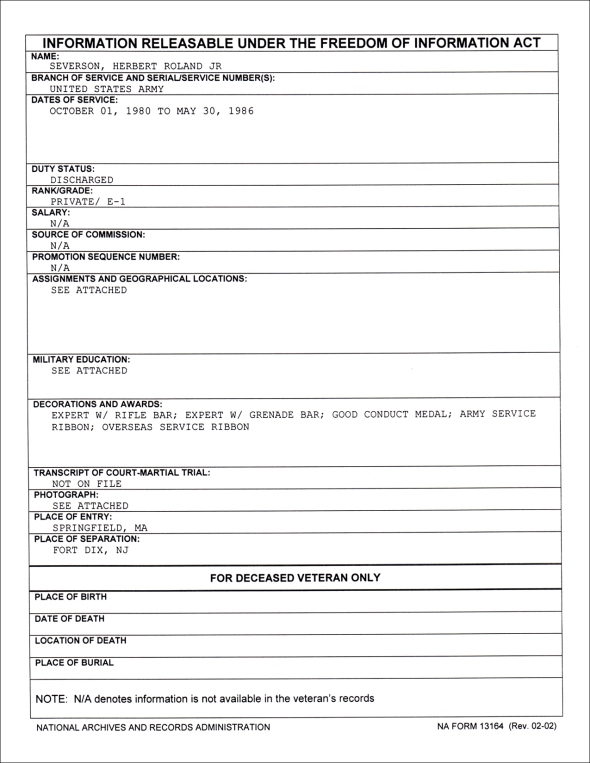 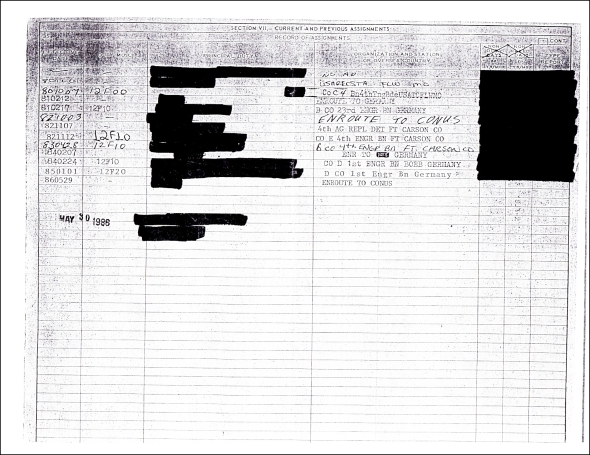 Newspaper articles and criminal records show that Herbert R. Severson was arrested for embezzlement of an American Legion Post, eventually plead guilty, and was convicted and sentenced for larceny. 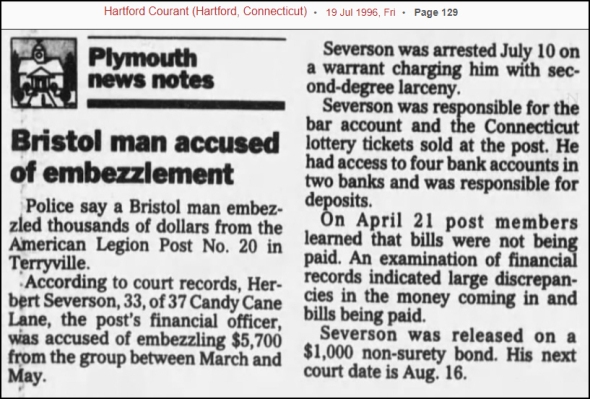 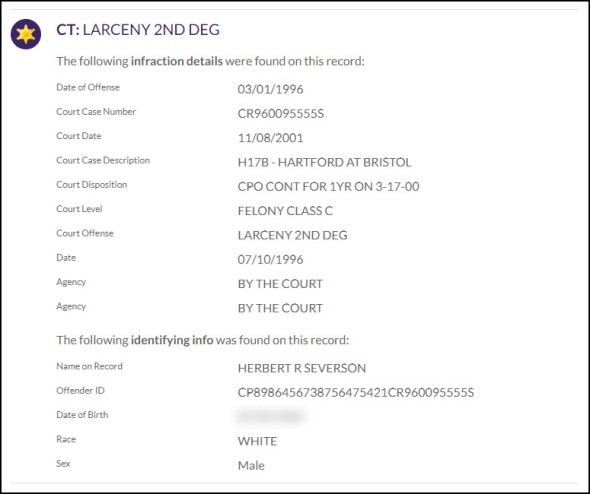 But, it didn’t end there and it looks like he was not able to put this incident behind him when he fell short of his responsibilities for court appearances and probation…

Herbert R. Severson spent six (6) years in the U.S. Army and got out as an E-1.  This is in direct contradiction to his claim of 22 years.  An E-1 is the lowest enlisted rank one could have.  After six years he should have advanced, so there is some suggestion of an issue that would have precluded him from normal advancement.  The MOS numbers suggest that he did advance but was busted down and had rank taken away from him.

Army Badges (BAD) are known as Marksmanship Qualification Badges. Soldiers get them initially when they go thru Basic Training as Enlisted.  During Basic Training at Fort Leonard Wood, Missouri, Severson qualified as an EXPERT on the Hand Grenade and received the Grenade Expert Badge. ‘BAD’ means ‘Badge.’

Same with the M16 during Basic Training. He qualified as an EXPERT and received the Expert M16 Badge (BAD).

Severson’s time in Germany was short.  His time in Colorado was also short.  He was possibly at Fitzsimons Army Medical Center, then returned to his time back in Germany.

There is nothing in his military records — training or assignments — that support his claim of service in Special Forces, Airborne or being qualified as a Ranger.  There is no assignment with the 75th Regiment.

There is nothing to indicate that he earned the Master Parachute wings or CIB.

There is no Purple Heart award listed in his records, let alone two as he claimed.

Perhaps the largest issue here is that there are no Purple Heart medals listed in his records.  The two military conflicts happening during the time that he served in the Army were Grenada and Beirut.  There is nothing in his records to suggest he served in Grenada.

The Purple Heart claims put Severson in direct conflict with Stolen Valor laws, especially if there were financial gains that he received from his claims.

Herbert R. Severson’s military records do not support his claims.

NOTE: We would like to give acknowledgment to one of our members that contributed a great deal to the research with this case.  This was truly a team effort and we deeply appreciate the contribution of our members when they want to volunteer their time and expertise.