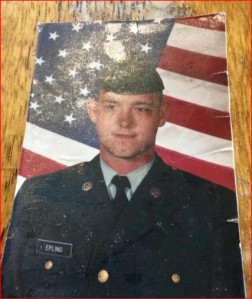 John Epling comes to us from Huntington West Virginia where he is making the claim of being a disabled Veteran going thru a nasty divorce.

Mr Epling goes on to say that his soon to be ex-wife has also taken his ” Entire Veterans Compensation ” due to her having an attorney and he didn’t.

He came to the attention of Military Phonies when someone saw him  posting the above screen save  in different facebook groups in his area and decided to fill out a report form on our website.

After locating John Epling’s facebook account, one of our investigators approached him. Mr Epling told our investigator that he served for eight years in the US Army. From 1999 till 2007. The first five years on active duty. While on deployment to Iraq, Mr Epling claims that his left knee was almost blown off from a Improvised Explosive Device.(IED)

Mr Epling decided to send our investigator bits and pieces of what he claims is his dd-214. We had to cover up parts of the dd-214 that he sent us in order to stay in compliance with what the National Personnel Records Center(NPRC) deems is confidential information to the Public. ( Separation and reentry code, DOB, SSN.) All we can say about the dd-214 that he sent us is that he did receive a Honorable discharge.

Using the information provided by Mr Epling and seeing that it didn’t match what Mr Epling told our investigator. Military Phonies filed for Mr Epling’s military service record using the privileges provided under the Freedom of Information Act. (FOIA)

The dd-214 that the NPRC has on file matches the one that Mr Epling sent us.  At this time neither dd-214 gives Mr Epling credit for being a combat wounded Veteran from the Iraq War. Nor does it show that Mr Epling deployed in support of Operation Iraqi Freedom(OIF). It also shows that Mr Epling was discharged as a E-4 instead of E-5.

According to his dd-214’s, He had one Military Occupational Specialty (MOS). Which was 21B10 Combat Engineer. It also doesn’t show that Mr Epling served for five years on active duty within the US Army.