“This Budds for you.”  – Anonymous

Carl Anthony Meek is proud of his military service and claims on his Facebook page that he served in the Navy, trained as a SEAL and joined SEAL Team 2 in 1969. 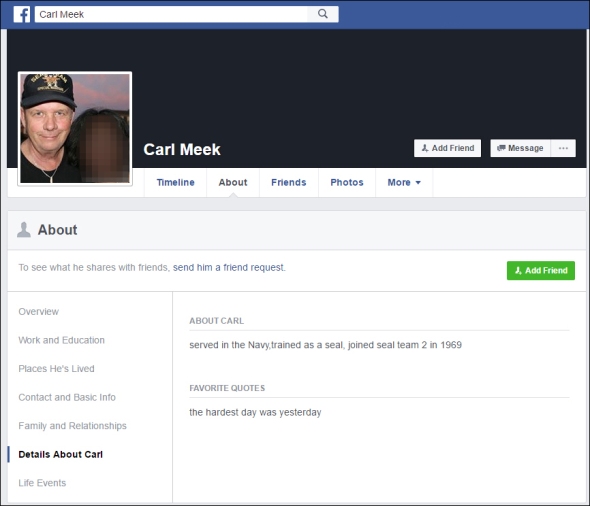 An enlargement of the photo on Meek’s profile page shows a SEAL Team cap.

On a second Facebook page, Meek claims that he served three (3) tours in Vietnam as a member of SEAL Team 2. 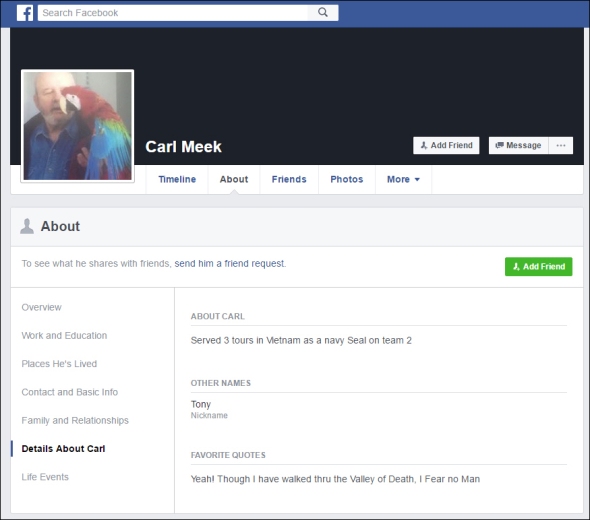 Meek would have joined a SEAL Team after BUD/S training, which he also claimed.

These claims were reinforced in a newspaper article in the Journal-News.

Meek was enjoying some praise for his service when he was called out on the SEAL claims by men that were SEALs and had access to the BUD/S database.

The conversation went offline, where Meek claimed he was in Budds [sic] class 5… 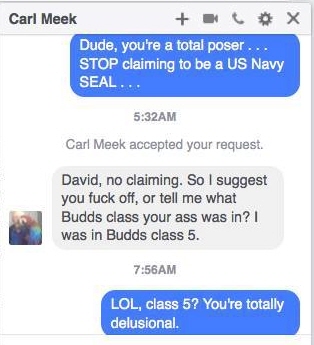 His service profile was checked online, it showed he was with va127 and vp31, but this is something the individual inputs themselves and is not official.  He also claimed that he was an E-4.

Carl Meek’s official military records were requested through the Freedom of Information Act.

In addition, we checked the BUD/S database and there was no Carl Meek listed.  BUD/S class 5 was held in 1952, long before Meek’s claim of 1969.

There is no Vietnam service listed for Carl Meek or supporting medals.  He would be correctly classified as a Vietnam-era veteran but not a Vietnam veteran.  This distinction is important and he should be keenly aware of the difference.

There is no military training or designation for SEAL in Meek’s records.

His time is accounted for in 1969, when he claimed that he went to BUD/S. He entered the Navy in Feb 1969. After boot camp he went to Naval Air Station (NAS) Lakehurst, NJ for school and to be stationed with VP31. He went to Parachute Rigger school.

BUD/S is around six (6) months worth of training and he could not have had time to complete this training in 1969 with all of his duty assignments in 1969.

The most challenging job he had was two months of hard labor after a special court martial.

Carl Anthony Meek’s claims are not supported by official military records.  According to his records, Meek was not a SEAL and he was not in Vietnam.