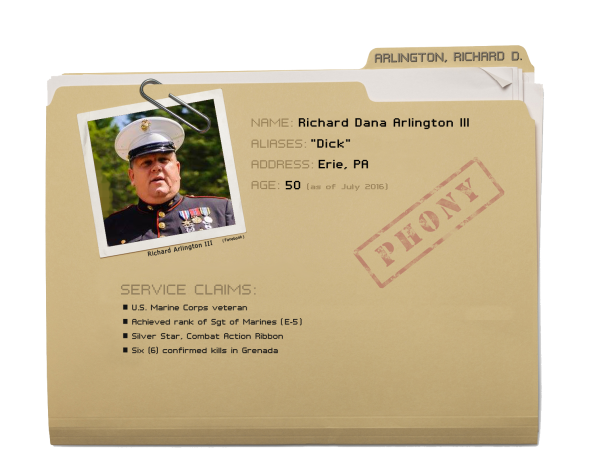 Richard Dana Arlington III is proud of the time he spent in the US Marine Corps. We’ve been told that he claims he had six confirmed kills during the US invasion of Grenada in 1983 – Operation Urgent Fury.

He wears a US Marine Corps uniform on occasion, proudly wearing a Silver Star, a Combat Action Ribbon and Armed Forces Expeditionary medal.  He also wears the stripes of a Sergeant of Marines.

He often wears “Croakies” with his uniform – a nice touch but we don’t think it is regulation. Neither is the belt buckle centered between the 6th and 7th button.

Arlington is an accomplished speaker as well as an author. He often touts his Marine Corps experience when promoting his seminars and book.

It is also advertised on his website that donations are made to veteran organizations.

Arlington goes on shows to promote his book.

In Richard Arlington III’s book “Why Not You?” he writes of being on enemy soil.

Arlington’s military records were requested through the Freedom of Information Act.

The USMC CAR database does not list Arlington as having a Combat Action Ribbon. However, that database is known to not be exhaustive in its listings.

Silver Stars are well documented across several available databases. Arlington is not listed as a Silver Star recipient for Grenada — or for any conflict for that matter.

Arlington’s official military records do not support his claim of the Silver Star or the Combat Action Ribbon.

We would go into the uniform regulations with Richard, but since he clearly does not care how he appears in that uniform, what would be the point?  If you can’t secure the collar and you begin to buy the belt material in spools, its probably time to either step away from the buffet or stop wearing the uniform. Just a suggestion from us.

Amazon lists his book saying, “Richard Arlington was a homeless man who built a multimillion dollar empire mowing lawns.”  Ya, well it appears to us he might have built that so called “empire” by using false military claims as well.

He appears to be some kind of expert on “Slip Trip & Fall and Premises Liability“. We are somewhat skeptical about his credibility as an expert witness on much of anything.  We don’t have any experts on lawn mowing or snow and ice removal around here but we do have plenty of experience with people who embellish their military service.  Smells to us like Richard needs some assistance with manure removal.  Some unsuspecting person might slip, trip, or fall if they step in the crap he spews.

Richard Arlington’s service claims are not supported by his official military record.

If Richard thinks its perfectly acceptable to sport around with a Silver Star that appears to be undocumented he should ask himself the question “Why Not You?” 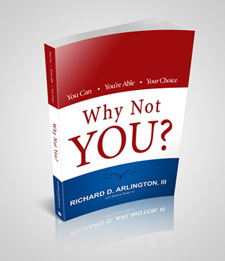 We think most of you have something called integrity and honor… Richard seems to have removed most of that from his life as well.  An empire built on manure will always begin to smell, sooner or later.

He should review his own website, in particular the Code of Ethics.

We don’t know who the Board of Governors are, but maybe they should consider revoking his Certification. 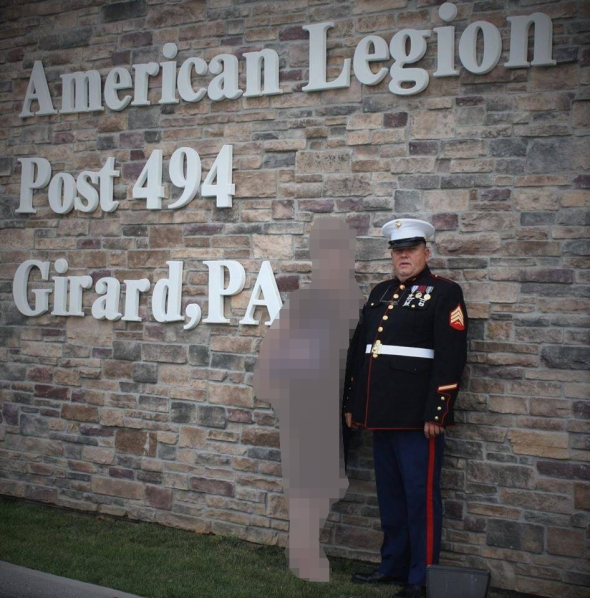 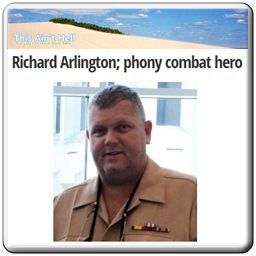